Check out the final video announcements of 2019-20 school year with the latest information on student-choice in grading, the last week of the school, and graduation, along with remaining shout-outs and the Masked Wildcat finale!
Posted by Nate Perry at 8:10 AM

For the third consecutive year, a Belleville High School team, under the direction of Master Teacher Ed Neumann, made it to the state for Project Lead the Way's Engineering Development and Design (EDD) competition. EDD is PLTW's capstone course for its Engineering Program.

The Milwaukee School of Engineering (MSOE) had 36 judges from across the United States evaluating 12 different projects from Wisconsin students. Elizabeth Taylor, Director of STEM at MSOE stated, "We were thrilled by how many students were able to still participate in the competition given the abrupt and sudden change during one of the most important parts of the project process...The ability to do so during all the changes the pandemic brought to your school year shows the highest levels of commitment and scholastic achievement."

Juniors Raina Nicholson and Anthony Pollen created a heated stress ball prototype that can be used by active outdoors people. This year the students presented and were recorded online. In the past, the presentations took place in front of a panel of judges as part of the STEAM Open House. Once the results were released, Raina and Anthony took second place in the state, earning a $2,000 team prize (or $1,000 apiece).

This finish matches Belleville High School's highest placement in the state EDD competition and solidifies the School District of Belleville's recent Distinguished District designation. Congratulations to Raina and Anthony on their tremendous work!

As we enter Memorial Day weekend and the final two shortened weeks of the school year, this week's video announcements include a special tribute to seniors, with Monday's and Tuesday's home visits for yard signs and scholarships. Let's finish the year strong, Wildcats!
Posted by Nate Perry at 10:17 AM

While the school building has been closed since March 13, Belleville Middle and High Schools continue to recognize students who have excelled in the new Safer at Home setting. Without being able to acknowledge these students in-person, teachers created individualized videos to send their nominees, and the selected students received gift cards in the mail. Congratulations to these Wildcats who are overcoming educational adversity! 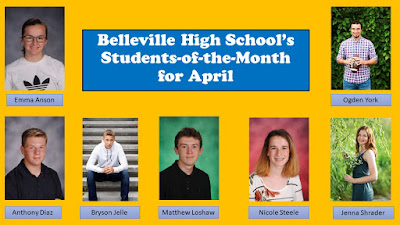 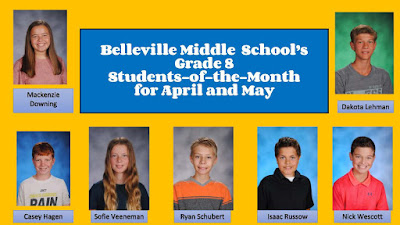 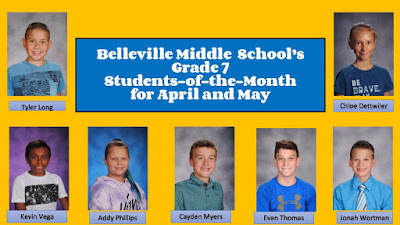 After not being able to seeing students on any regular basis since March 13, delivery of senior yard signs and scholarships this Monday and Tuesday was truly a fulfilling experience. Alec Ausmus from WKOW contacted me several weeks back, and I cannot thank him enough for his coverage spotlighting our seniors.

Our staff could not wait to participate, and the Francois family and other scholarship donors, along with high school counselor Melanie Norton, made a final push to have scholarships and certificates prepared weeks earlier than normal. Thanks too to Lana Swenson and Janet VanBlarcom for the yard signs that they created for the Class of 2020.

We will continue to explore ways to honor this class so that they know, despite COVID-19, that we appreciate their hard work and effort in achieving this once-in-a-lifetime goal.

Belleville High School is proud to announce that senior Hansi Bartle is being recognized by the United Nations Association of the USA and InnerView in the 2nd Annual National Community Service Awards. Student award levels (for service from June 1, 2019 through April 15, 2020) include:
Hansi Bartle has earned the Honor Award and invested the most effort and impact on quality education. You can see Hansi's contributions online at this opening page and a more detailed description of her service hours (with photos) with this link.

Congratulations to Hansi! Belleville High School commends her on her service to the school and community! 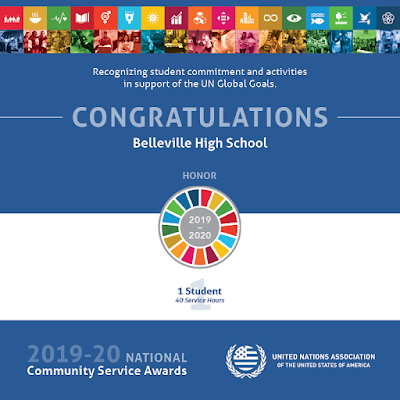 For the 2019-20 school year, the School District of Belleville joins just three other Wisconsin school districts with this distinction and is by far the smallest school district in this select group.

The Project Lead the Way recognition program is designed to honor districts and schools committed to increasing student access, engagement, and achievement in their PLTW programs.

In the School District of Belleville, students are empowered at a young age- as soon as they start school. Every 4K-5th grade student engages in the Project Lead the Way Launch biomedical, engineering, and computer science modules. All 6th graders participate in the Medical Detectives biomedical course and App Creators computer science course. Julia Xistris, Project Lead the Way Launch Master Teacher and Belleville Elementary School STEM Coordinator, teaches the PLTW computer science modules to students in grades K-5. “We are proud of the work that is being done by the students and teachers to experience a project-based learning curriculum. Project Lead the Way is inquiry-based, and our students are engaged as they collaborate, make connections, and take ownership of their learning.” All 4K-6th educators teach biomedical, engineering, or computer science modules throughout the year. Launch modules and teacher resources are available in both English and Spanish and are fully aligned to the Next Generation Science Standards.

Second grade teacher Kristi Miller enjoys the excitement the curriculum brings to the classroom. “Project Lead the Way was the best part of our day. My students are so engaged and really learn to communicate and problem-solve together. They are able to follow the design process and overcome the challenges they face. I witnessed a lot of perseverance and resilience, which are the keys to 21st-Century learning.  As they continue to grow, these skills will strengthen and encourage them to be lifelong learners.”

What better testimonials than the words from second-graders! “I like going through the design process and working together with my friends. I get to hear my friends’ ideas and combine them with my ideas to try and make something awesome!  Sometimes we fail, but we keep on trying.” - Hazel
"It was really nice because I could learn how to make things. It is really important to ask people for multiple ideas because one idea may not work." - Aaron

Belleville Middle School students are engaged in Computer Science for Innovators & Makers and PLTW8. High school course offerings include Computer Science Principles, Principles of Engineering (POE), Introduction to Engineering Design (IED), Computer Integrated Manufacturing (CIM), and Engineering Design and Development (EDD). Ed Neumann, the Project Lead the Way Coordinator for the district and an EDD Master Teacher, responded to the recognition, "There are many skills that are present in all PLTW courses: students collaborate, learn from failure, use STEM principles to solve real-world problems and develop soft skills that better prepare them for post-high school careers and education. The School District of Belleville has students working on these skills from ages 4 to 18 in PLTW courses! It is a tremendous honor that we have earned the designation of a distinguished district. A huge thank you to our community, parents, students, industry partners, and staff for all of their support; without it, this would not have been possible."

Jared Schulting, a 2019 Belleville High School graduate now attending UW-Platteville, noted, "After taking multiple PLTW courses in high school, I realized how greatly each one impacted my life. Not only did they prepare me for my future in college, but they gave me the knowledge and confidence to work on projects around the house. PLTW opened up many different opportunities, from constructing with my hands to writing CNC code, I was able to complete many different projects. I would like to thank the PLTW instructors and the School District of Belleville. Because of their support, knowledge, and dedication toward the program, I have been able to succeed in my work and college experiences.”

Another 2019 BHS grad, Dylan Gratz, added, "Project Lead the Way helped me find my future in STEM as soon as I began high school. Though I had always had an interest in this field, PLTW classes were the first time I got true exposure and experience. These classes in high school, along with Mr. Neumann's guidance, paved the way for my future."

Project Lead the Way President and CEO Vince Bertram had this message for Distinguished Districts.

As we begin to wind down the 2019-20 school virtually, please continue to tune into the weekly video announcements to stay current with the latest news. Check out Mr. Farrar's and Mr. Gentilli's latest shout-outs!
Posted by Nate Perry at 12:26 PM

In 2019, BHS students took 143 Advanced Placement exams. Wildcat passing rates were an astounding 81.1%. That would have clearly qualified Belleville High School has a Level I school. However, only 28.4% of students at BHS took an AP exam last spring, narrowly missing the 30% participation benchmark for Level I. Belleville High School staff will continue to encourage students to challenge themselves with Advanced Placement courses. With just 4-5 additional students taking an AP exam, Level I is once again within our reach! 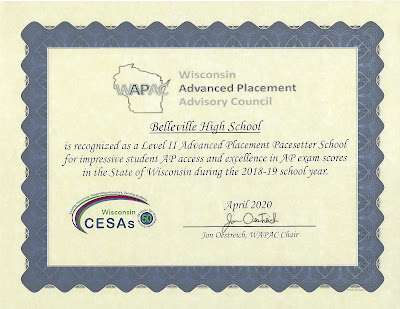 With just a few weeks remaining in the school year, check out this week's announcements with some new twists. Stay in the know at both Belleville Middle and Belleville High Schools!
Posted by Nate Perry at 12:06 PM

Each year, the Capitol Conference honors its member schools' top academic graduating seniors. This banquet has usually been held at the Sheraton Madison Hotel on the second Monday in May. However, due to the Safer at Home order and COVID-19 pandemic, the annual banquet to recognize these students, scheduled for May 11, was cancelled this year. Belleville High School staff still wishes to honor these students for all of their hard work and accomplishments. The ten featured students will finish their high school careers with cumulative grade point averages of 3.88 or higher. We are proud of these Wildcats! 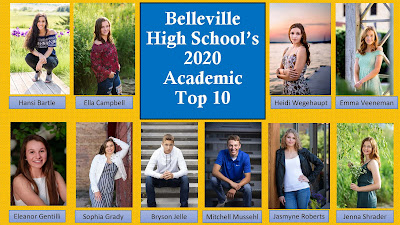 As we enter the month of May, we have now completed four weeks of online learning. Check out this week's announcements for information on student choice in grading. Have a wonderful weekend, Wildcats!
Posted by Nate Perry at 12:44 PM