Members of the Class of 2021 began their high school careers last night at Freshmen Orientation by signing a graduation pledge. Jostens representative Dale Komro spoke to the students about the value of a high school diploma, with adults making $500,000 more in lifetime earnings with a diploma. He broke that down to about $86 per hour that a student profits from their 4-year high school education. We are looking forward to a strong start to the Class of 2021! 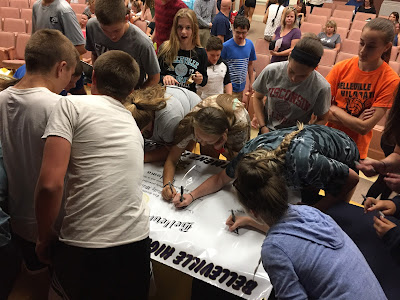 Congratulations to our National Honor Society Officers for the upcoming school year! They include:

President - Noah Fahey
Vice President -  Vanessa Erb
Secretary - Eliza Woods
Treasurer - Otto Anson
Publicist - Eve Palmer
They will be asked to provide leadership for the many service projects that NHS completes around the school and community. 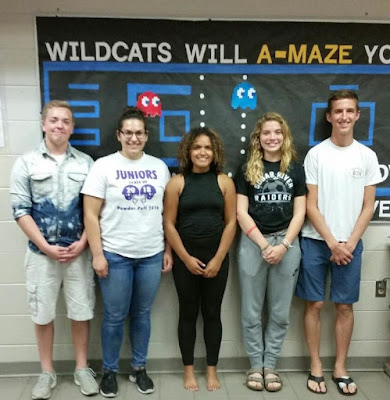 The school board recently approved the launch of the Wildcat Wall of Fame. It is located at the west entrance of the high school. A committee will be formed comprised of community members, district staff members, and students who will then nominate, research, select, and present one candidate per year.

Wildcat Wall of Fame recipients and their families will be invited to an all-school assembly. The Wall of Fame Committee will present the recipient at this ceremony, with a student researcher introducing him or her. The recipient will be given the opportunity to address the audience and his or her plaque will be added to the wall at this time.

Belleville teacher and coach John Becker was announced at the home football game on Friday, August 25, as the first inductee into the Wildcat Wall of Fame. The inscription on his plaque reads:

John Becker began teaching and coaching at Belleville High School in 1964. He coached football in Belleville for 28 years. In that time, he amassed a record of 144-105-9. His teams won six State Line League championships and achieved three undefeated seasons. Coach Becker always put his team first and gave the credit to his players. One of his former players remarked, "He taught us the values of self-discipline, teamwork, attention to detail, poise under pressure, and 'practice makes perfect.'" He taught in the district for 33 years at the elementary school and high school in Physical Education and History. He also served as the varsity basketball coach and assistant baseball coach. He was inducted into the Wisconsin Football Coaches Association Hall of Fame in 1994. Mr. Becker retired from the School District of Belleville in 1997. 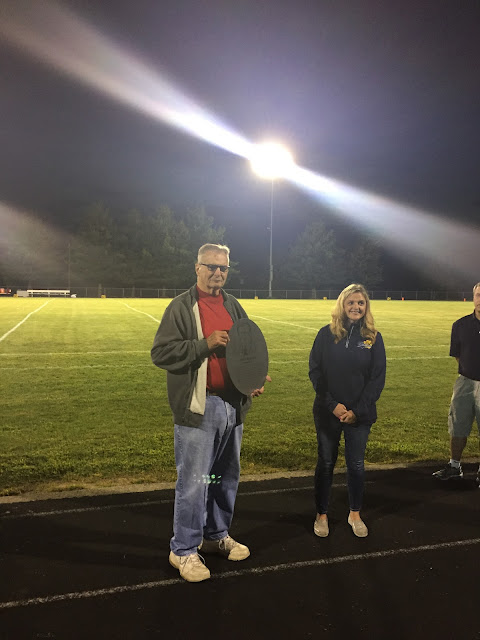 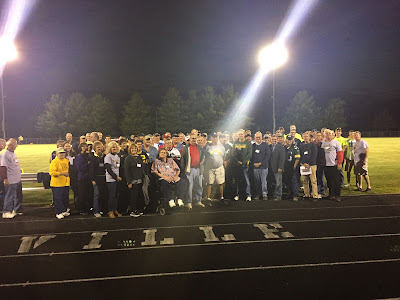 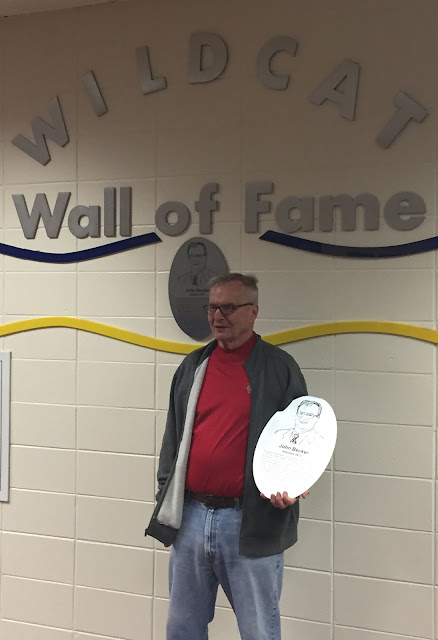 Over the weekend, Belleville Middle School students were recognized at a Strides for Africa fundraiser in Madison. Signs that runners/walkers read along the 5K route explained how our students and teacher (Mrs. Miller) helped to raise money for a well near a school.
Photo courtesy of Amy Nagy 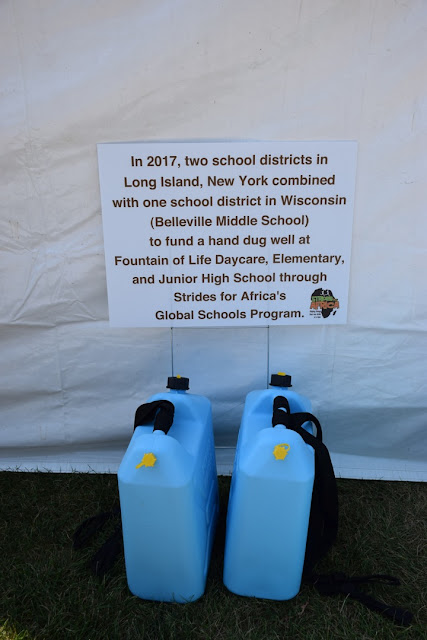 Spirit Club members, under the direction of Mrs. Tretow, met this morning to re-paint the Wildcat paws that lead to the school and the stadium. They also placed cups in the fence for both the Wildcats and Raiders. Our first home event is Thursday, August 17th- a home football game against Elcho starting at 6pm. Thank you ladies for showing your school spirit! 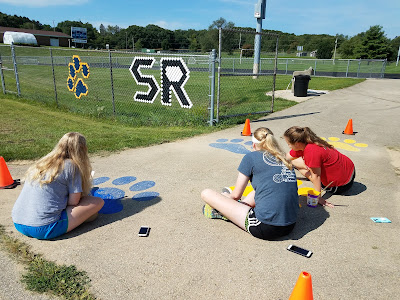 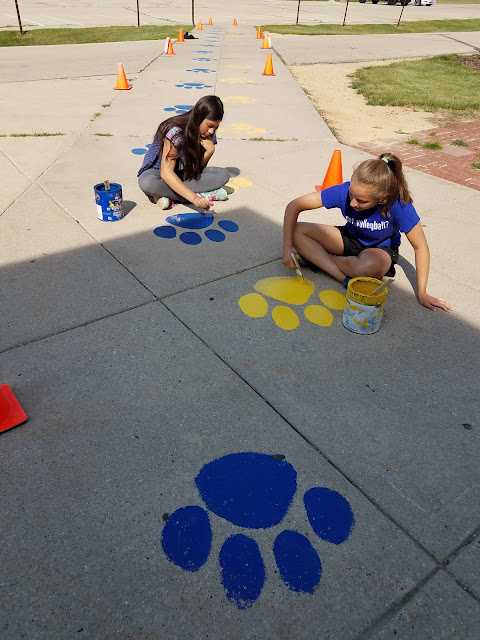 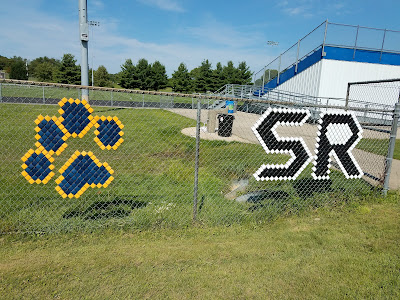 On August 1st, the DECA Leadership Board held its annual DECA leadership retreat. This year, with the generous donation from Mike Treder, the DECA Leadership Board experienced an escape room at My Escape Mission, located on the eastside of Madison. The students were given one hour to work together to solve clues, disarm a mock explosive, and escape the room. With five minutes left, the DECA students came together and completed their mission. The students learned not only team-building and communication skills but how to overcome adversity when the situation became more challenging. As their advisor, I can honestly say that I was extremely proud of their willingness to support each other and work together to achieve their goals. I have now challenged the students to bring what they learned from this experience into the school year and apply their knowledge to make DECA and the School District of Belleville better. [Submitted by Mr. Farrar] 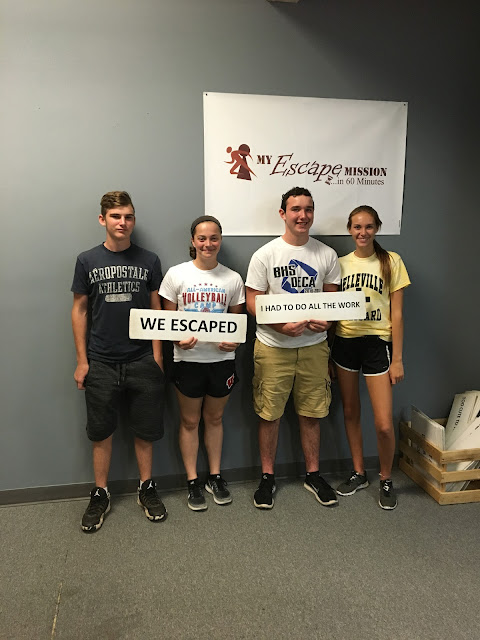 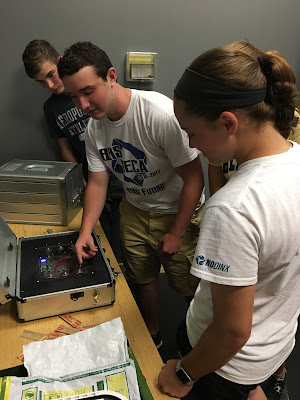